Claude Marchal and the history of WSGCM 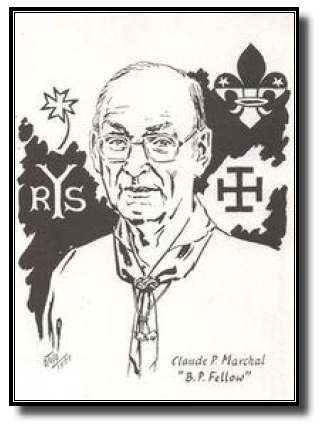 History of World Scout Collectors Meetings date back to 1983, when the first "rassemblement" was held in Bullet, Switzerland, organized by Claude Marchal (1927-1997). Cub scout before WWII, Claude has been Scout and Rover when 20. He was then member of the French Scout International Team and unofficial Secretary of Pierre Delsuc, and therefore involved in the organization of the 1947 World jamboree in Moisson, France, during the summer of 1947. And his first scout collection was of stamps, and related to the history of world Jamborees.

In 1975 he moved to Bullet, Switzerland with his wife Solange, and establisehd his Scout Museum in the same place, close to Yverdon, in 1983; the same year of the first Collectors Meeting. Claude spent several years to catalog his collections, with the support of his wife. He has been also Vice President of SOSSI, The Scouts on Stamps Society International, and nominated member of the "BP Fellowship", which recognizes individuals for their contributions to the World Scout Foundation to help support Scouting, awarded a special insignia by His Majesty The King of Sweden.

He has partecipated to many International and World Collectors Meetings, always "prepared" to give suggestions and support to anyone. With his international experience, he has always been above all troubles between the several Scout Collectors Clubs around Europe. He died, age 70, at the end of January 1997 for some post-surgery complications. In all his activities he had been able to donate himself completely, and undoubtely he has been the pioneer of an unknown aspect of Scouting: the collection of scout memorabilia, at very high level. One year after his death, all his collections left Europe and found home at teh Las Vegas Scout Museum, USA (now closed). But a part of his personal archives were donated by his widow to the Town Library of Toulouse, France, in 1999, beside the general French Scout Archives.

Swiss collectors have organized the 40th World Scout & Girl Scout Collectors Meeting (WSGCM), which will be held from 28 July to 31 July, 2022 on the occasion of the Federal Camp of the Swiss Scout Movement in Brig (VS).