Finally it's done. In the first quarter of 2018 (January) Michel publishes the catalogue "Scouts- Whole World".

Scout collectors have been waiting for this for years. For the first time ever, a complete stamp catalogue will only be published via Scout stamps. With the appearance at MICHEL, the Scout's stamps are also ennobled as a collective theme. MICHEL does not issue a catalogue if there would not be a significant number of such brands!

The MICHEL catalogue: an absolute must for philatelists 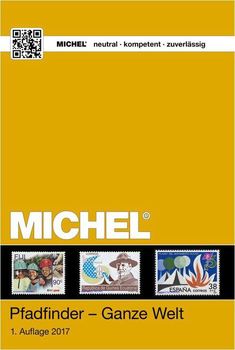 Whoever collects stamps in the German-speaking world will not get past a stamp catalogue. The MICHEL catalogue is the most renowned of all the works and is regarded as a standard work by stamp lovers. The catalogue is also widely used abroad, as it contains all stamp issues of all countries in the world issued by state postal administrations.

Now every collector can know: a well made catalogue, with clean presentation and color printing and what is very important is reasonable pricing. All this goes without saying at MICHEL. The exact release date has not yet been fixed. Near Switzerland. Scout's philatelic association can pre-order the catalogue. Preorder now! Immediately after publication you have the catalogue in hand. Now Scout stamps will collect really beautiful!