The Siege of Mafeking

The Siege of Mafeking in South Africa from 1899 to 1900 was one of the most famous military actions of the Boer War. 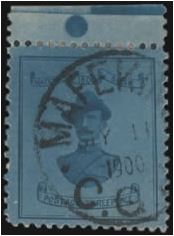 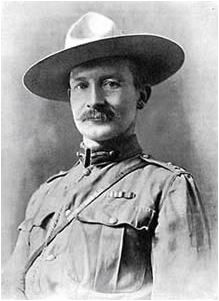 The Siege of Mafeking in South Africa from 1899 to 1900 was one of the most famous military actions of the Boer War. For 217 days a Boer force of over 8000 troops surrounded a much smaller British garrison under the command of Colonel Robert Baden-Powell. Mafeking was defended by only 1500 men including local volunteers, but to the enemy the force seemed much stronger because of Baden-Powell's brilliant military tactics.

Baden-Powell's snipers were sent out during the night to lay in wait near the enemy camp until almost sunset the next evening. With their targets well illuminated and the enemy blinded by the setting sun, the snipers could take their best shots from relative safety.

Baden-Powell's employed a number of 'bluffs' that made the Boers believe Mafeking was much better protected than it actually was. He sent residents to the outskirts of the town where they made a big show of burying hundreds of metal boxes. A 'test' was performed by igniting a stick of dynamite, and the Boers were convinced that Mafeking was surrounded by a mine field.

The town's only searchlight was moved regularly to give the impression that many existed. The illusion that the town was surrounded by searchlights discouraged the Boers from attacking at night.

When the supply of barbed wire ran out, Baden-Powell's men strung imaginary wire around new trenches, and then pretended to crawl under the non-existent obstacles. Watching from afar, the Boer scouts reported that the trenches were all protected by barbed wire. 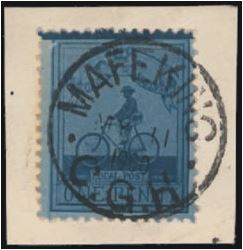 Men could not be spared to deliver military messages and civilian mail, or to keep look-out, so Baden-Powell formed a cadet corps of boys as young as 9 years old to perform these and other important duties.

Defying the odds, the British held out and the siege was lifted when the Boers retreated in May of 1900. Following the siege Baden-Powell became a national hero, and would later start the Boy Scout movement based on the brave boys of the cadet corps of Mafeking who had literally served as 'scouts'.

Various stamps were issued for local use during the siege, including two depicting Baden-Powell, and one depicting Warren Goodyear, a 12-year old cadet, delivering mail on his bicyle. Goodyear is considered to be the first Boy Scout.